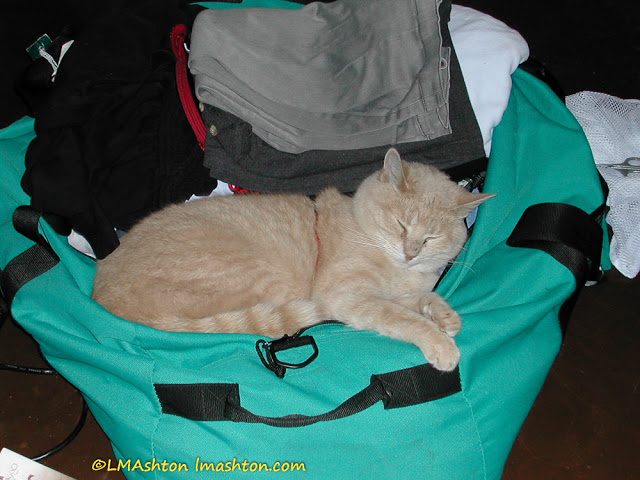 How to start this blog? It's an odd adventure, in a way, and it isn't a typical trip. It isn't a vacation, mostly, but in some ways, it is. It's a departure from reality, and doesn't that sort of count as a vacation?

This trip begin with me packing, frantically getting everything done, clothes and things all over the floor, stuffing things in as best as I can, hoping I actually pack all the right things. There's so much stuff I can't possibly take with me on the plane, being limited to two checked bags and two carry-on bags. I hope that my aunt and uncle won't mind packing up the rest to ship to me in Sri Lanka. I hope I haven't left behind anything too important.

Perspective. Me and my cats. That's what's most important. Everything else? Just window dressing. 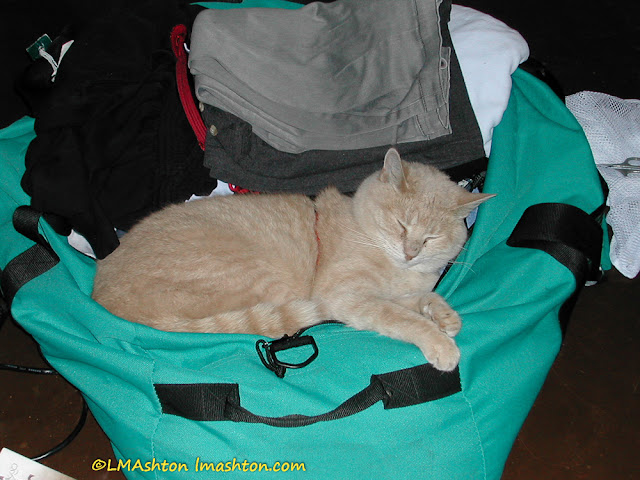 It's time to catch the cats. Tellulah first. Tellulah is five, peachish in colour, five years old, and the quintessential prissy princess feline who immaculately grooms herself – all except her nails. Those are always filthy. But the rest of her? Always pristine. But I digress.

Catching her is a pain, as always. Ten minutes of chasing her from one nook and cranny to the next and finally, I catch her and stuff her into a cat cage.

Oberon, three, gray with black and white, and the typical teenage boy bully, is next. He's so dumb, he always responds to the "T" word. So I say "treat", and he comes running. I stuff him into the other cage.

And that's when I remember that I haven't put them in their harnesses, nor have I secured their water compartments or given them water. Oberon, the bully, will break his water dish given a chance, so it becomes doubly important to secure them. Done.

Off. Uncle Abe and I load everything into his van, and we're off. We drop the cats off at Cathay Pacific Cargo at a little after 10 pm, right on schedule. The man there assures me that Cathay has transported hundreds of animals, and they're always fine. He's very reassuring, very soothing. I worry anyway – these are, after all, my little fuzzies. But I believe him, and I say goodbye to Tellulah and Oberon.

Abe and I head to the main terminal of the airport to check me in, but no one's at the Cathay Pacific counters. Another couple approaches me, and it turns out the counter won't be manned for a couple of hours. Abe and I decide to get something to eat instead, but I'm too nervous to eat much of anything. I pick at my food instead.

It's now midnight, and my flight is scheduled to leave in another three hours.