How We Met: The Good Parts Version 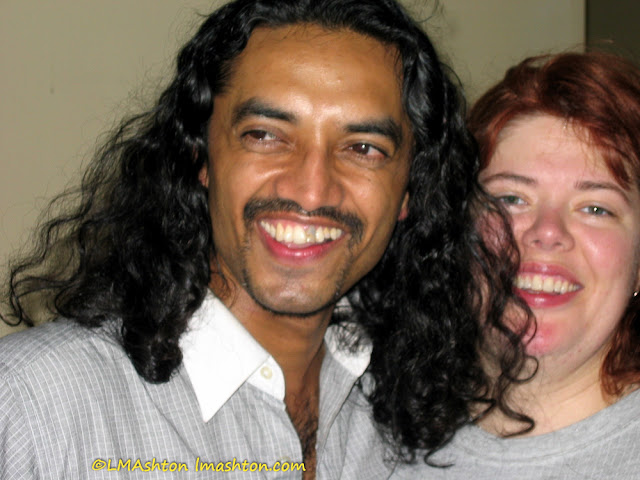 I was living in British Columbia, Canada, was single, and had stopped dating several years before – I was tired of the whole dating scene, wasn't looking for anyone, and was happy and content with my busy single life.

On the spur of the moment, I decided to start a blog. I wanted to switch careers from accountant to writer, and it would help me hone my writing skills and experiment with different styles, topics, whatever. Get the creative brain working in a whole new way.

Blog, for those of you who don't know, is short for web log. It's basically an online diary, journal, rant, place to blow off steam, share your opinion, philosophize.

I did a google search for blog software and downloaded and installed a few blogging programs, checked 'em out, and settled on one that I liked – Blog 7.0 from www.farook.org.

I started writing my blog and tried publishing it, but no luck. I posted a message onto the help forum, and the owner, Fahim, responded. I followed his suggestions, which cleared up some things, but not all.

I posted another message onto Fahim's help forum. He responded very quickly and said to email him off-list if I still had problems. I followed his suggestions, and again, it solved some things, but not all, so I emailed him.

He invited me to chat with him – it would be easier and quicker to solve the blog problems. In the next two hours of chatting, a lot of things were sorted out and what I hadn't understood, Fahim patiently explained. We also started chatting about other things – nothing deeply personal or important. Just chit chat. I found him entertaining and funny, more so than anybody else I'd chatted with in a long time.

We finally got my blog publishing properly – hallelujah! – but now I didn't like how my web pages looked, and would he be willing to help me? Secretly, I'd enjoyed chatting with him so much that I wasn't ready to let go. Gladly, he said. But it was approaching midnight my time zone and I was losing the ability to use brain cells. He agreed to help me the following night.

The following evening, we started chatting again, and he patiently helped me make my pages look just right, and I found out in the process that he was just as anal retentive as me. Okay, I can be as polite as the next person. Obsessively detail oriented. At this point, I was already attracted to him – his personality, his intelligence, his humour, his philosophy, his entire character. He was like a mirror image of me in so many ways. I had only seen one picture of him from his help forum, and he was laughing like a mad man. But this guy was living in Sri Lanka, and I was living in Canada. I figured it wasn't going to go anywhere – what chance did it have? But I enjoyed chatting with him so much that I'd just enjoy being friends with him and leave it at that.

We chatted the next day, and the next day, and the next day after that, upwards of four hours, and by the end of a week, I was in love with him, and I could feel that he was in love with me. What? This isn't supposed to happen! About two weeks after we started chatting, Fahim told me he loved me. He'd been wanting to tell me this for a while, I knew, or at least I'd hoped, but until he told me, I worried that it was my imagination. I wasn't ready to deal with it yet.

We were now chatting, oh, five or six hours a day. I was getting almost nothing done in the rest of my life. I was smitten like a love sick teenager – I couldn't get enough of him. After much consideration, we both decided we were too in love, too compatible, and too sure that our relationship would work. I refused to answer online. I wanted to accept in person. He understood.

Fahim didn't care where we got married and lived. He offered to meet me anywhere in the world I chose. I didn't want to stay in Canada. I started asking about Sri Lanka – what was it like there? He told me everything negative about Sri Lanka that he could think of – he didn't want me to be shocked if I came over. Oh, don't misunderstand – he loves his country and he thinks it's beautiful, but I come from beautiful, clean Canada.

Fahim already had a job in Sri Lanka that paid well enough to support both of us. I wanted to quit work and write my novels. It made sense for me to move to Sri Lanka. Here I am, ending my employment, packing house, and moving halfway around the world with my cats, no less, to marry a man from a different culture, different race, different religion, I'd known him online for less than two months, and I'd never met him in person. 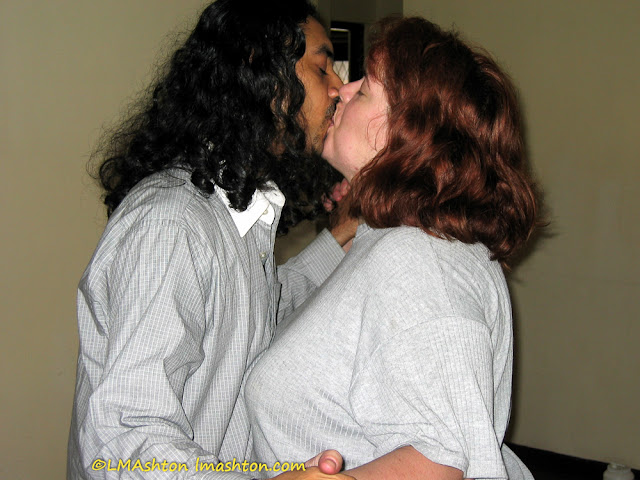 Sure, we'd talked on the phone, and we'd used our webcams and headphones to chat over the internet as well, but – was I nuts? I told my favorite aunt and uncle, with whom I'd be staying for the last week before I left Canada, about marrying Fahim. I also told a couple of very close friends. I wanted to tell more people I cared about, but between the time we decided we'd marry and when I flew, I had only three weeks to take care of everything.

I always wanted to elope. Fahim, thankfully, agreed. I also rather liked the shock value of announcing, after the fact, "Guess what? I moved to Sri Lanka. And, by the way, I got married."

By this time, Fahim and I were chatting up to eight or ten hours a day. Can you say, "obsessed"?

The evening of Tuesday, August 12th, 2003, arrived, and I said my goodbyes to my aunt and grandmother, and my uncle and I left for the airport in Vancouver, British Columbia, Canada. Fahim had arranged the flight from Sri Lanka and I was to pick the ticket up at the counter. I handed my passport over to the check-in lady, explained, and she was off. Suddenly, I'm sweating, my heart is racing, I'm feeling dizzy. What if wires got crossed somewhere? What if the ticket wasn't here?

A minute later, she was back, tickets in hand. I feel much better suddenly. Then it was time for a tearful goodbye to my uncle, and I went through security.

I called Fahim on my cellular, and we talked for almost the entire next couple of hours until my flight left. What did we talk about? I don't know anymore. I'm not sure I even knew then. I was nervous and in love and excited. What if he changed his mind about me? What if I changed my mind about him?

What if I didn't recognize him at the airport?

All this while knowing that I loved him madly, and he loved me madly – and I couldn't live without him. I suspect, in circumstances like these, it's pretty normal to freak out – and that's the message my left brain kept interrupting me with. That and talking to Fahim helped me from going over the edge. He kept me calm. He kept telling me how much he loved me. He also kept proposing to me. "I love you. Will you marry me?" he asked. Oh, Fahim. I love you so.

By the time we finally met in person, he'd proposed around 200 times. We'd lost track at around 150 or so, so this was a pretty good guess. I refused to answer, but it didn't matter – he knew what the answer would be.

I called Fahim from Hong Kong after I figured out the phones. It was so good to hear his voice.

I arrived in Sri Lanka. 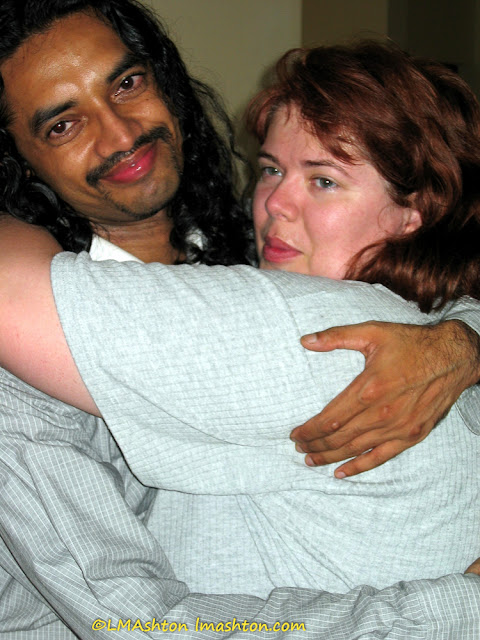 After Immigration and Customs, I was in the main lobby of the airport where Fahim said he'd meet me, and it was empty. No Fahim. I looked around – nothing. There was hardly anyone. The lobby turned a corner, and I went with it. I kept looking, and finally, I saw him – long, black, curly hair, smiling and waving, there was Fahim, on the other side of the doors. I broke out into a huge grin. I couldn't have stopped myself if I tried. I was so happy to see him. Fahim! My Fahim!

And finally, finally, we get to see each other in person.

When I reached him on the other side of the double doors, he hugged me so hard and wouldn't let go. And we kissed – our first kiss – in front of tired and anxious strangers. After a few minutes, the guard standing two feet away from us told us we had to move – we were blocking the doorway. We came to our senses – as much as we could in a love-drug induced state – grabbed a taxi, and we were off for home.

Home. Fahim already rented a home for us. We had hardly anything there to speak of, but it didn't matter. It was our home.

At nine that morning, we had a traditional Muslim ceremony with his two best friends as witnesses – a mere eight hours after meeting in person, two months after meeting online. And we were – and still are – madly and deliriously in love.

I have my Fahim, and he has his Laurie. 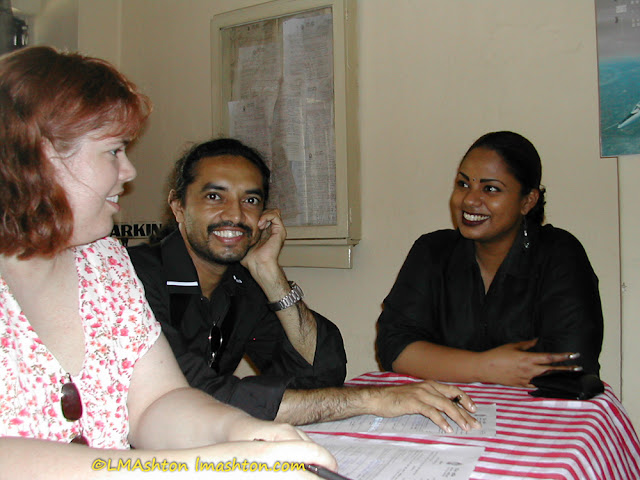 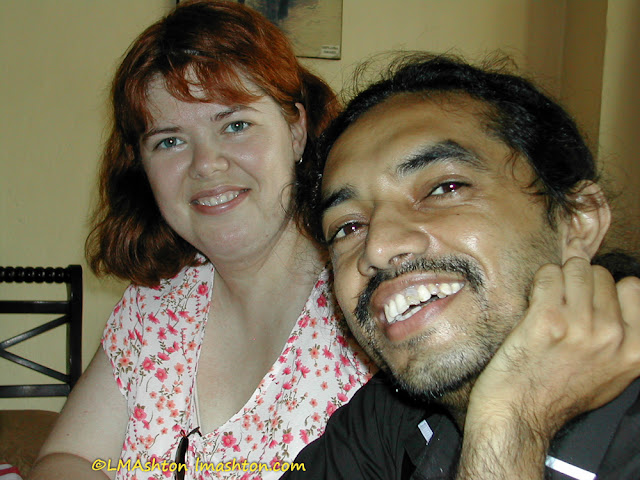 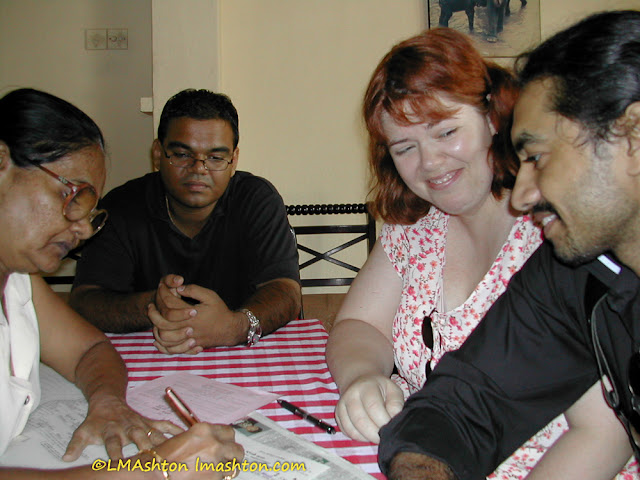 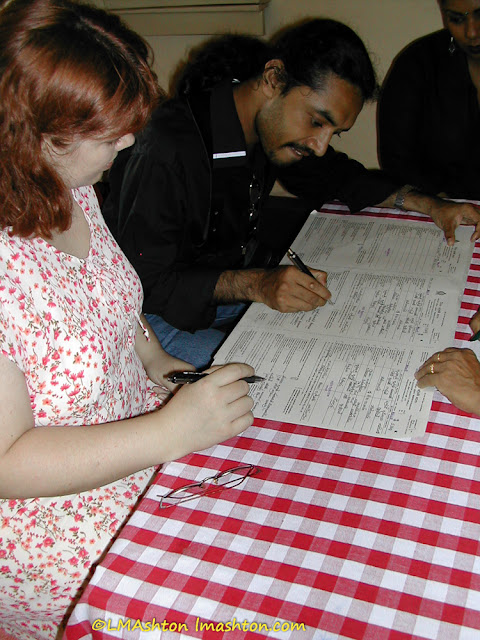 Laurie and Fahim were married on 15th August 2003 in Pelawatte, Battaramulla, Sri Lanka.

The story continues in this blog, Walking the World

Tags: fahim and laurie how we met marriage

2 thoughts on “How We Met: The Good Parts Version”